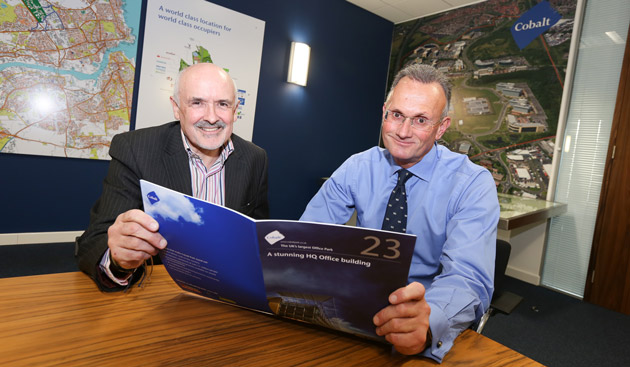 Cobalt, located in North Tyneside, is an amazing success story for the North East. It’s the largest office park in the UK and in 2014 let more space than any other office park in the country. Adrian Hill, a director of Highbridge Properties plc, talks to Barney Frith, head of property at Square One Law, about his career.

Cobalt is a huge success story for Highbridge Properties and, on completion, will comprise 2.5m sqft of offices.

Cobalt currently has a workforce of more than 13,000, which is set to rise dramatically with the recent letting activity, and it is anticipated that the number of people working at Cobalt will, on completion of the development, increase to over 18,000. Recent lettings include 78,000sqft to Utilitywise plc, (the largest letting in the region for five years); 25,000sqft to Hewlett Packard; 10,000sqft to Accenture; 10,000sqft to G4S; 10,000sqft to Perfect Image; 5,000sqft each to Barnardos and IBM and, most recently, 39,200sqft to Siemens, making a total of 182,000sqft.

Adrian said: “These deals add to the already strong tenant line-up at Cobalt, which also includes Procter & Gamble, EE, North Tyneside Council and Santander. Not only have companies chosen to relocate their current employees but also see it as a premier location, with excellent communication links, for the expansion of their businesses. Six major occupiers have all taken either a second building or additional floors; in fact, HP has just taken its third building.”

Adrian joined Highbridge Properties in 2009, following a very successful career with global property firm Cushman & Wakefield for 28 years and, interestingly, it was a chat with the family’s bank manager that set him on the property path. He said: “My family moved to Whitley Bay from Lancashire when I was four years old and I went to King’s School at Tynemouth. When I was doing my A-levels I still didn’t know what I wanted to do, so my father decided to take me to see his bank manager for advice.

This was 1972 when bank managers actually talked to you! He had a good overview of what businesses were successful and said people in property were doing well, so I decided to go to Trent Polytechnic (now Nottingham Trent University) to study urban estate surveying. “My first job was working for the government as a district valuer in London, where I gained my surveying qualifications, and I then moved on to work for Healey & Baker, one of the largest chartered surveyors and commercial property consultants in the country.”

Adrian worked in the industrial department and, although based in London, covered the North East and other regions; in fact, his first deal was in Cramlington. In 1981, he was introduced to development work, working on projects at the London Docklands and Castle Marina Park in Nottingham. Adrian said: “This work really interested me and, in 1985, I was asked to set up and lead the out-of-town retail parks team.

Very few people had specialised in this area at that time and we started with retailers operating out of industrial buildings and then later this changed to bespoke out-of-town retail park developments. My team developed a specialism and Healey & Baker soon became leaders in this area and, in 1986, I became a partner.”

In 1991, a harsh recession hit the UK and out-of-town retail fell away quickly. “I remember those tough times very well,” recalled Adrian, “but I also remember that an interesting opportunity came my way in 1991. I had been asked to speak at the firm’s annual dinner and Sir Brian Goswell, deputy chairman of Healey & Baker, offered to help me with my speech. Working together was fortuitous and he persuaded me to leave retail and join his team in office development. “It was one of the best decisions I made in my career and I was soon running the office development team for all the regional offices and, in 1992, was made an equity partner, specialising in office development and agency.”

In 1992, the recession deepened. When Adrian took over the team there were 21 people. The restructuring he introduced meant that, by 1997, they were a team of seven, but the fee turnover had doubled and they went on to win Office Agency Team of the Year. Success carried on and the team grew to 15 people. During this time Adrian was travelling abroad extensively, working with more American partners and corporates and spending a lot of time in the US attending conferences and meeting clients.

“It was an exciting time, but exhausting with so much travelling,” he said. “It was about this time that Healey & Baker merged with the highly-successful US firm Cushman & Wakefield, which was looking for an opening into Europe. We became part of a much larger firm with global aspirations. “In 1993, I was sent to Hong Kong for 10 weeks with a brief to report on whether the firm should open offices in the Far East. It was a fascinating time to be looking at Hong Kong, China and Thailand, and Cushman & Wakefield subsequently opened offices in those countries. “Then, in 1996, I went to India to meet a potential firm that we could buy, but I had only three days to make my report. However, it was clear that India would be an important part of the firm’s global expansion plans and it was great experience for me to be involved at this level.”