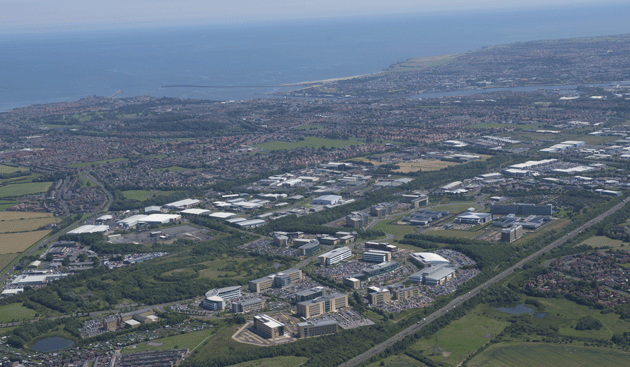 Early predictions were that Cobalt would employ 5,000 people - but it's now the largest business park of its kind in the UK.

Eighteen years ago the front page of The Journal carried news of a massive jobs boon for the North East as work began on the Cobalt Business Park – but early predictions over its success were way off the mark.

“Five thousand jobs could be created on the new multi-million pound Cobalt Business Park being created on North Tyneside ” was the Journal headline, but jump forward to 2016 and the park is now the largest of its kind in the UK.

Cobalt employs more than 14,000 people in 29 impressive buildings, all of which now have tenants – though there is still a little room left for firms to take up.

Leeds Building Society has just signed up for the 20,000-plus square feet available in Cobalt 7B – a deal that marks a real milestone for developers Highbridge, which is poised to make two further deal announcements soon, in signings which take the overall occupancy to 90%.

When plans were first announced for Cobalt, everyone involved could see it would provide huge opportunities for the region.

The development was being built on Enterprise Zone (EZ) land on the north side of the Hadrian Business Park and soon attracted interest from potential occupants before the foundations were laid.

The Tyne and Wear Development Company (TWeDCO) sold the site for development to developers Highbridge Properties, which had also been involved in the creation of Newcastle Business Park. The organisations involved could see strong demand from regional, national and international companies seeking to take advantage of land with EZ status.

Benefits of EZ status were immense to all the investors, occupiers and developers involved, not least of all because incoming occupiers enjoyed freedom from business rates for up to 10 years.

Cobalt was planned to cover 93 acres in total, of which 57 acres had EZ status until the year 2006 and was also in a Development Area, making grants available for job creation and training.

Since it was completed in 2002 Cobalt, the park has been a key component in the regeneration and economic development of the North East, while also becoming the most successful office park in the UK in 2014 letting more space than any other development.

Cobalt is now home to 20 major occupiers, across multiple sectors including IT, financial services, utilities, renewables and public sector including some of the largest names in the corporate world.

Seven major occupiers – Accenture, EE, HP, P&G, North Tyneside Council, DNV-GL and G4S – have all expanded into additional space since first arriving at the park, and there is still some space left in several of the buildings, giving the park the opportunity to eventually employ an estimated 20,000 at full occupancy.

As well as getting its own road built to give drivers into the park better access, there are now 10 direct bus services covering 40 key destinations across the region, with express services connecting to Newcastle city centre in only 15 minutes, and a total of 1,000 buses a day serve Cobalt.