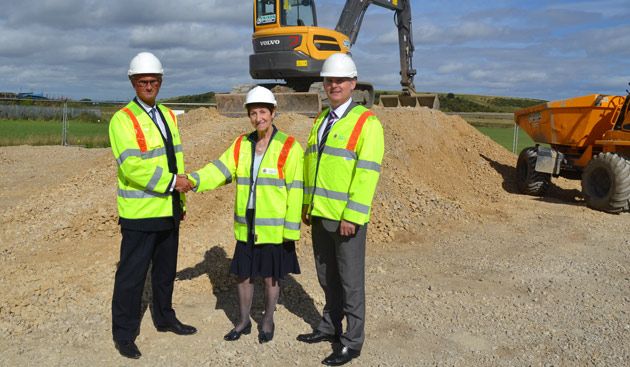 The creation of a major new access point together with the grant of a strategic planning permission constitute a significant step forward in the development of Indigo Park.

Highbridge Properties, developers of Cobalt in North Tyneside, the UK’s largest office park, are working in partnership with North Tyneside Council’s Inward Investment arm Invest North Tyneside over the development of Indigo Park. The scheme is an 82 acre strategic employment site capable of accommodating in excess of 1.3 million sq ft of new manufacturing and distribution space and generating well in excess of 1,500 jobs.

North Tyneside Council have secured £4.32 million of funding for infrastructure improvements to enhance the site’s accessibility.

In addition, the existing western access to the site will be widened, improved and will also benefit from a traffic light controlled junction with Sandy Lane.

The funding covers further road improvements between Indigo Park and the A1.

North Tyneside Council’s Planning Committee have also approved the creation of a wildlife corridor, designed and to be created by Highbridge, which will run north to south through the site linking the Weetslade Country Park to Gosforth Park and thereby forming part of the strategic wildlife corridor that runs from Jesmond Dene into Northumberland.

As further evidence of Highbridge’s ecological credentials an extensive buffer zone has been designed along the entire northern boundary of the site to soften the impact of the proposed development on the Weetslade Country Park.

Furthermore Highbridge have also entered into a legal agreement with North Tyneside Council designed to fund mitigation of the loss of habitat for farmland songbirds.

Adrian Hill, Director of Highbridge Properties, said: “We are delighted that, working in close collaboration with North Tyneside Council, we have been able to take two major steps forward in providing a genuinely first class new access route into the proposed development and agreeing a wildlife strategy which addresses the importance of this site from a bio-diversity point of view. These steps allow us to move forward cleanly in the development of major new employment generative premises.

We are convinced that Indigo Park will play a major part in the generation of new employment for the region”.

Norma Redfearn, elected Mayor of North Tyneside, said: “It is fantastic to see the Indigo Park development taking shape and the potential opportunities it will create in North Tyneside are very exciting.

“The plans offer so much space for businesses from all different sectors to operate and will generate in excess of over 1,500 jobs for residents in North Tyneside and the wider region, which is brilliant news.

“The newly-designed space to encourage wildlife will also be a great addition and will help to preserve the safety and welfare of the animals in the area, which is always one of our priorities.”

Highbridge were advised by LSH as Planning Consultants, E3 Ecology Ltd and PDP on ecological and landscape design matters respectively.